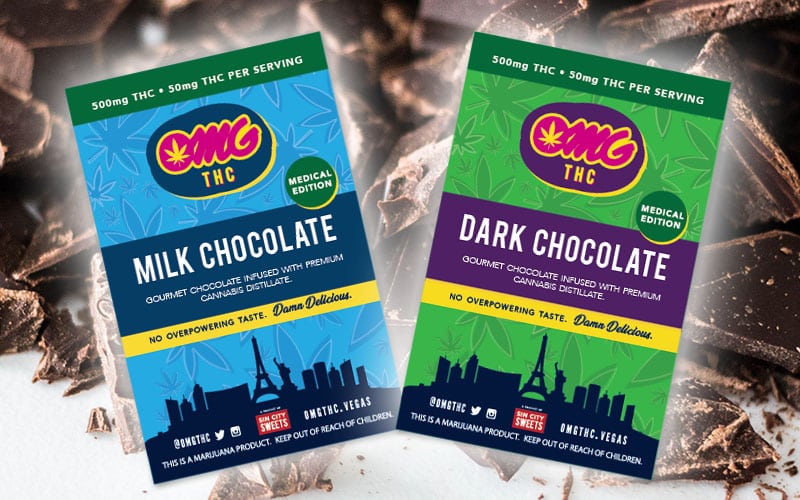 Our diverse staff here at OMG THC has a reputation for trailblazing a ton of new cannabis products from hops-infused vapes to edibles with distillate. We cater to all sorts of cannabis users and do not discriminate based on why you smoke. Furthermore, we actually care about the quality of our products. All our cannabis oil is pure, and we only use CO2 and ethanol extraction methods, especially in our Medibles Chocolate Bars. We even have a chocolatier on staff so that only the finest chocolate is used in our Medibles chocolate bars.

OMG THC has been a Las Vegas Nevada company since the beginning. So, before we go on more about our Medibles Chocolate Bars let’s take a look at how Nevada has become one of the best places to find medical and recreational marijuana.

How Nevada Became a THC Capital

Some of us are old enough to remember the giant, intimidating billboards at most of Nevada’s major entryways that said stuff like “even one marijuana seed will get you prison!” Twenty years ago, Nevada had some of the strictest drug enforcement laws in the country and plenty of cannabis users were being sent to prison, some of those people were even just using the illegal marijuana as medicine.

A surprising ballot to legalize medical marijuana was passed in Nevada in 1998 as well as in 2000, even though possession of even small amounts of marijuana was a felony at that time. The initiative needed to pass in two separate ballots before it could become state law due to the State of Nevada Constitution.

‘WHEREAS, Modern medical research, including the report Marijuana and Medicine: Assessing the Science Base that was released by the Institute of Medicine in 1999, indicates that there is a potential therapeutic value of using marijuana for alleviating pain and other symptoms associated with certain chronic or debilitating medical conditions, including, without limitation, cancer, glaucoma, acquired immunodeficiency syndrome, epilepsy, and multiple sclerosis.”

Fortunately, NRS 453A.050(8) states that outside of those conditions set forth, any condition that causes symptoms such as seizures, nausea, or severe chronic pain, medical marijuana can be used. This allowed doctors that knew of the medical uses for cannabis to be able to prescribe marijuana to a great many people who needed it.

Unfortunately, the language used in the law to legalize medical marijuana in Nevada lacked certain details needed for businesses to begin selling and distributing cannabis to patients who had marijuana prescriptions. People that were fortunate enough to obtain marijuana prescriptions were forced to grow their own plants at home. Sen.

Tick Segerblom, a major proponent of Medical Marijuana in Nevada said, “The politicians just didn’t have the will to do what the people wanted. Why the Legislature could not get behind this blows my mind.” Eventually, medical marijuana dispensaries opened in Las Vegas and Reno, but the process took three times as long as in other states such as Colorado or California when they legalized medical marijuana.

The Federal Government Continues to Stand in the Way

The DEA’s Take on Medical Cannabis

Currently, the Federal Drug Enforcement Agency considers marijuana a Schedule 1 Drug, right next to other Schedule 1 drugs like heroin and LSD. The DEA did consider classifying marijuana as a schedule II drug, like Oxycodone, but they decided against it. Yup, you read that right.

The DEA considers weed to be as dangerous as heroin, but less dangerous than Oxy. Because of this researchers need a special license to do studies on marijuana when It comes to serious illnesses. However, that hasn’t stopped doctors from all around the country to issue prescriptions for marijuana.

The FDA’s Take on Medical Cannabis

According to health.harvard.edu, the most common use for medical marijuana is for pain control. Most often, it is used to mitigate pain from chronic issues. Especially because it is much safer than opiates. The Federal Drug Administration states on their website fda.gov:

“The FDA understands that there is increasing interest in the potential utility of cannabis for a variety of medical conditions, as well as research on the potential adverse health effects from the use of cannabis.”

To date, the FDA has not approved a marketing application for cannabis for the treatment of any disease or condition. The agency has, however, approved one cannabis-derived drug product: Epidiolex (cannabidiol), and three synthetic cannabis-related drug products: Marinol (dronabinol), Syndros (dronabinol), and Cesamet (nabilone).

These approved drug products are only available with a prescription from a licensed healthcare provider. Importantly, the FDA has not approved any other cannabis, cannabis-derived, or cannabidiol (CBD) products currently available on the market.”

The Benefits of Medibles Chocolate Bars

While there hasn’t been as much research into the health benefits of our Medibles Chocolate Bars as we would like, there’s one way to figure it out for yourself. Try them! And don’t be afraid of trying cannabis. Many elderly people still buy into the old myths and propaganda from the previous century. Find out the truth, exercise your freedom, and see what cannabis can do for you.

There are many situations in life where you can’t smoke. However, you need immediate cannabis assistance. Our Medibles Chocolate Bars are perfect for those situations. The freedom to just have a quick nibble from a delicious chocolate bar whenever your symptoms flare up is invaluable.

While our Federal Government drags its feet and denies the benefits of medibles, now is the time for you to find out for yourself. At least in Nevada. As long as you have a Nevada medical cannabis card, you can sample our 500mg medibles chocolate bars.

We’re homegrown in Las Vegas, Nevada. We embrace niches others in the Cannabis market ignore or reject. Vegan? Diabetic? Gourmet cook? Old-school hash connoisseur? Looking for a specific ratio of CBD and THC in your products? You got it!

Our products are simple and they are great. From the cannabis oils, we use to the packaging and the varieties of our products. Finally, and best of all, our edibles are damn delicious! In other words, if we wouldn’t want to eat them, we aren’t going to sell them to anyone else. We NEVER cut our concentrates with anything – period! EVER! We use top-of-the-line C-Cell hardware – always. We ensure quality and purity.

For adults 21 and over. Keep our products out of reach of children and pets. Be smart. Be Vigilant. Finally, enjoy our products responsibly and keep everyone safe.